We, le sabot, are a mobile D.I.Y.-Kitchen. Our food is organic and vegan, tasty and not expensive.

This year we’re celebratig our 10th anniversary from the 29th of October til the 1st of October in Meuchefitz in the Wendland (close to Hamburg). There will be Workshops, Kitchen Olympics and lost of fun stuff to do – pack your favourite recipe and join us! 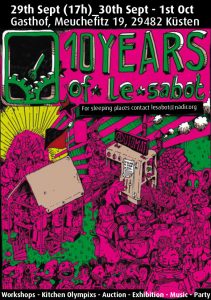 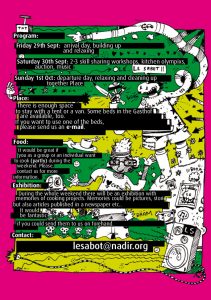 About us, Le Sabot:

The word »sabotage« derives from the french word for clog: »le sabot«. To stop the machines, the workers threw their clogs into them. We find it important to fight power structures and to resist exploitation. This can be done in different ways. We do it by supporting activists during meetings and actions in a basic need: we cook.

We want to have political discussions with those with whom we cook and do more than just supply infrastructure.

Because living together requires solidarity and cooperation that is not based on profit-making and its negative consequences, we try to live an alternative life even now, for example by seeking for short ways of transport and fair working conditions when we do our grocery shopping.

We cook for political and not for commercial reasons, often on a donation-basis. If there is a surplus, the money goes back to political projects and actions we want to support.